Wednesday was Ash Wednesday which signifies the beginning of Lent. the time in which the people of God Corporately fast. Fast from what ever they choose but still fast. It is a tradtion that has only recently become popular for the protestant church to participate in. however it has a long standing history.

this semester I am taking a class called history of the sacriments and for class yesterday the reading was on lent and it's origins.

it has its roots in the Fast day before Pascha, a christian celibration of passover with the crusifiection and the day in which people were baptised. those who would be baptised on Pascha were encouraged to fast for the day, many were encouraged to fast for a week. in the 3rd centrury it was common for people to fast for the three weeks prier to thier baptism was they were going through the Catechumens (teachings about the christian faith). in the fourth century from the influence of the monastic-asetic movement it became custemary for the faithful to goin in the pre-baptism fast as a way of taking a kind of refresser course on what they belived. this was when it extended to begin on the 6th or 8th sunday before easter depending on where one lived.

It is called a 40 day fast because at the time (and continuing today) people did not fast on sunday, and in some places they did not fast on saturday either. the Forty days became offical in the 7th century. This is also when ashes were added, which originated in Gaul (modern France). and that was conected to penince for someone who had commited a grevus sin. this however was not the prominent reason for the fast.

it was orignially a way to get people to fast, fasting is an importaint disopline of the church and through scripture we see that God works through fasts. it also became a method of teaching. during this fast people would learn and be remeinded about what they belive as christians.

most importaintly though, i belive, is that it was a way to promote unity in the Church Universal. after the church became the religon of the empire there became many slack christians, Lent was to be a corporate even of the church in which everone fromthe bishop down to the humblist catechumen lived at least for as season as a member of the ody of christ.

during this time of nominal christians the purpose of lent was to also remind the careless and the sinful christians of the claims of the christian standard:

"Be not conformed to this world, but be transformed by the renewing of your mind"
Romans 12:2
So as you enter this lental season may God bless you and may you always be a member of the body of Christ.
Posted by Unknown at 3:23 PM No comments:

Evil, what is that

Okay bare with me a little here because i did something very fun the other day after my philosophy class. I proved that evil does not exist. that there is no such thing as evil, that evil is actually good.
(disclaimer this is more a fun thing to play with the philosophies of others not what i would actually hold to, and yes there are probably holes in my logic)

we start with David Hume. Now David Hume is not a christian. he looks at the world and says this about God:
so that is where we find Hume, Not claiming that there is no god, but rather that he has the power to stop evil but does not desire to do so. god is not the all powerful, Good, and righteous designer.

Hume Proves his idea that God is not good by using the following scenario:

My question for Hume is this, if this theoretical person is from an other dimetion or parrallel universe why would he have the same idea of what Good is? for the sake of clarification were are Going to name this person in the other universe steve.

most people know how much i love Valentines day. and I still did celebrated in my own way. Lets Face it i love going a little Gothic and i look good doing it. 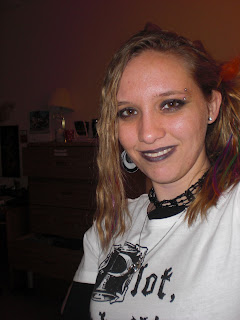 Yeah I love birthdays. but really who doesn't? well my birthday was on Wednesday andbecasue i live in a dorm and the RA desided that Wednesday was a good day for the all dorm meeting i did not get to actually celibrate with my friends. we are doing that tonight. (yeah for bowling) any way i did comemerate the day by doing something that most people would concider... rebelious, or maybe Subversive. take a look: 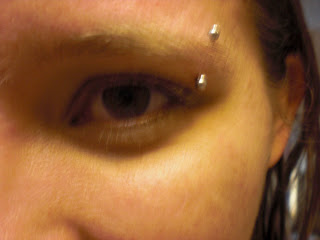 sadly the end of the holiday season. but was in not a good game? a spectacular game. considering that the cardinals are considered one of the worst teams in the NFL. the last time they were at the super bowl was 1944, back when they were the Chicago cardinals.

as usual this year i rooted for the underdog. for some reason it is just more fun to root the underdog on. i watched the super bowl and the huge TV in one of the boys dorms. there was pizza and pop, chips and dip and of course wings. (even if they weren't from dash inn, which made me slightly home sick.)

my good friend Lisa decided that foot ball is not nearly as exciting as hockey and would randomly start yelling fight during a tackle. (do not that one of the Steelers did through a punch at a cardinal and when one of the steals went out of bounds on the red side he almost got clobbered.)

there was only two people in this party who were rooting for the Stealers, and only one of them was incredibly vocal about it. he mocked the rest of us at the end of the game when we were all hoping for a miracle. even though it is the super bowl and miracles are known to happen.

all and all it was a great party. we laughed, we joked, we jumped, and screamed. and really what else can you ask for from a super bowl party?
Posted by Unknown at 12:46 PM No comments: