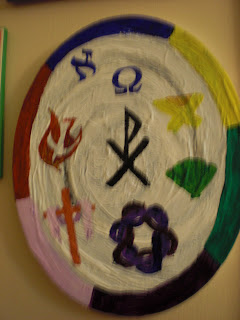 this one is called year of our lord. Pink is Easter, Purple is Lent, Green is epiphany, Yellow is Christmas, Blue is advent, and Red is Pentecost.
Posted by Unknown at 9:50 PM No comments:

Today was the day. Junia woke groggily, it was impossible to sleep well on the floor of her cell. The sun shone in through the small window. “It looks like it will be a good day to die.” She said to herself, “A good day to go home.” By home she meant the eternal rest of heaven. Sure she had been condemned as a heretic, but that didn’t matter. She and God both knew that wasn’t her sin. It was just what she got for standing up against the inquisition of the Knights Templar.

She had been stupid. Ever since Pope Boniface had been humiliated by the French king, he only did what was in the French’s best interest. She had just thought Boniface would listen to her; she was the Cursed Saint after all. That used to mean something.

Junia sighed and leaned back against the cold stone walls. Pride, that was her sin, for that she would burn as a heretic. It would hurt, a lot. That wouldn’t matter if it meant I can go home, She thought. She held up her wrists, the tattoos marked her as the Cursed Saint were still there. She closed her eyes, this isn’t fair God. Maybe it was stupid to think they’d be gone. The curse wouldn’t be lifted till the judgment day when the skies rolled back and the Son of God would come. Today would be a good day for the return. She thought with a huff.

She placed her hands on her flat belly. 844 years and she could still feel her unborn child. The one they had taken from her the night they cursed her. Small tears crept out from her eyes, tears for her child, husband and friends who had died that day. “Why can’t I rest with them?” she asked half expecting an answer, stranger things had happened.

But not today. The only thing strange that would happen is that after the fire she’d still be alive. That’s what the curse was: to live making penance till the last judgment for the sins of the Seven. It was some druid’s twisted sense of justice, really she was only their lackey, and scapegoat.

The cell door opened and they took her to the stake. After a few words the executioner lit the fire. The flames eventually raged into a roaring furnace. She refused to scream, even though all she could think of was the pain. The last thing she remembered was thinking, please God let me die. Then there was only darkness.

Junia woke sometime later, still in pain but at least free. She figured they must have dumped her body in the river. she had washed up on a shore not far from the city. She leaned back against a tree, “God does this mean I have been purified?” She said as she looked up. The leaves danced in the wind and the sun shone down threw them. That was answer enough for her.

Oh yeah the insanity of nanowrimo is just around the corner. I am very proud of myself. I have only one more thing left to do for my planing, its a bit of a big project but it is the last thing left to do.

I am still rather optomistic also about my goal to get all my home work done for november. i have 13 idems still on my to do list but i think i am going to be able to get them done.

i will probably not be able to finish up my story from last year which i was really hoping to get done before i started this november, however it is very close so who knows maybe it will still get done.

for those who are reading this and wondering what i may be writting about this year here is a little info:
title-Lucky 13

also for kicks and giggles here is the soundtrack that I have put together so far for my story:

Who is the blessed one?

the blessed one is the man who has been struck down.
who's feet and legs have been broken so he can not rise
for he will not be destroyed
the man of sorrows will life him up.

the blessed one is the women who is persecuted.
who lays in a pool of her tears shed form the loneliness of her heart
for she will not be abandoned
the man of sorrows will comfort her

the night is long
and wail there is night there is sorrow
but wait, for joy comes in the morning
it is the joy which comes for sorrow that makes us blessed.

Posted by Unknown at 1:48 PM No comments:

The economics of Fragle Rock

Fraggle Rock, one of those wonderful things from my childhood. who couldn't love thes magical creatures that spent their days dancing and singing, playing in the water and eating radishes, and doser sticks. (to be honest i think this is why i like radishes.) the intersting thing about Fragle rock is that it is a good picture of what karl Marx social structure.

the fraggles get to injoy thier lives playing and eating without any worries. after all the song says wories are for another day, dance your cares away! Oh to have that kindof life.

but not everyone in this world is living the life of ease. no the dozers sing a much different tune: work your cares away dancing is for another day. the dozers are perfectly content to do nothing ever day but build these beautiful skyscrapers only to have the fraggels knock them down for food. every day is just like the other filled with work work work.

so there we go. one group works so the other group can just sit back and enjoy life.


and for something completly different i have up dated my picture blog that i used to use when i was in suriname. don't get to exsited though it is just pictures of campus for now.
Posted by Unknown at 9:54 PM 2 comments:

Posted by Unknown at 6:53 PM No comments:

that is right. on the last excavation of Antarctica the scientists made an unexpected find. there were Penguins who it seems have learned the art of the ninja. it may be unbelievable but it seems that Antarctica is the long time home of a secret ninja base. this base has been the training ground for greatest ninjas there are and have ever been. this base has several entrances around the world, mystical portals. it is said that one of these was used by Bruce Wayne of Wayne enterprises. at least that is what some people are saying in order to make up for his strange disappearance.

the penguins of this base are carefully trained as sentries to keep outsiders from finding out about this most secret lair. they are so good about this that only one of the unfortunate scientists who made this discover was able to come out alive. he told reporters that this was do to his training in the Israeli army where he learned Crag Magog.

Believe it or not.

Labels: rigley's believe it or not, weekly world news 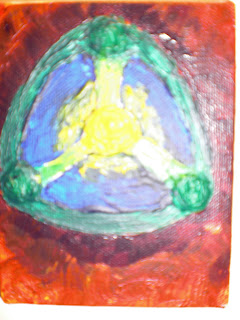 The bread your body broken
The wine your blood spilt
I take in my hand the symbol of salvation
The body broken by execution.
The blood spilt on a rugged cross

I want to be one with you now
Not tomorrow, not some day
Now, this second of this minuet of this hour of this day