Station 14 Jesus laid in the tomb 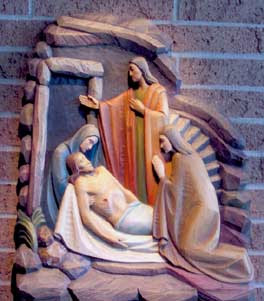 YOUR ONLY SON, NO SIN TO HIDE
BUT YOU HAVE SENT HIM
FROM YOUR SIDE
TO WALK UPON THIS GUILTY SOD
AND TO BECOME THE LAMB OF GOD

O LAMB OF GOD SWEET LAMB OF GOD
I LOVE THE HOLY LAMB OF GOD
O WASH ME IN YOUR PRECIOUS BLOOD
TILL I AM JUST A LAMB OF GOD
Posted by Unknown at 5:26 PM 2 comments: 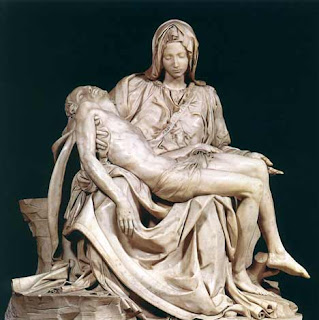 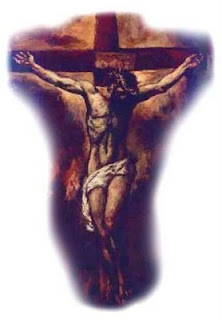 Posted by Unknown at 2:19 PM No comments:

Luke 23:39-43 one of the criminals who were hanged there was hurling abuse at him saying :”are you not the Christ? Save yourself and us!” but the other answered, and rebuking him said, “Do you not fear God, since you are under the same sentence of condemnation? And we indeed are suffering justly for we are receiving what we deserve for our deeds: but this man has done nothing wrong.” And he was saying, “Jesus remember me when you come in your kingdom!” and he said to him, “Truly I say to you today you shall be with me in paradise.” 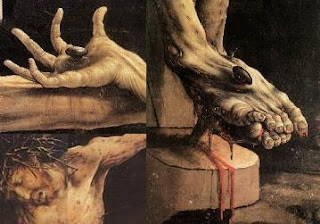 Then they brought him to the place Golgotha, which is translated, place of the skull. They tried to give him wine mixed with myrrh; but He did not take it. And they crucified Him and divided up his garments among themselves, casting lots for them to decide what each man should take.
Mark 15:22-24
Posted by Unknown at 3:06 PM No comments:

The weight of all the world’s sin was on his back. He headed up the hill and gravity added to the weight that already was crushing him. Again He fell, and is again dragged up and goaded. His strength has for a while utterly failed Him. But it was not yet finished. Just a little farther to go and then it would be done. 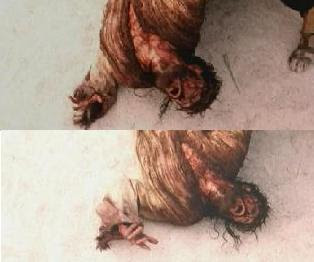 He humbled himself by becoming obedient to the point of death, death on a cross.
Philippians 2:8
Posted by Unknown at 12:01 PM No comments:

Mary the Mother of Jesus, Anna the Prophetess who had waited to see the messiah come, Peter’s mother in law whom Jesus healed, The women who had suffered with a hemorrhage for twelve years, Jairus’ daughter who Jesus raised from the dead, Mary Magdalene who Jesus freed from seven demons, the daughter of Abraham who was bound with a crocked back that forced her to walk doubled over, the gentile women who would not leave till Jesus agreed to free her daughter From a demonic position, the mother of James and John, Mary of Bethany and her sister Martha, the women caught in adultery, The widow with her two small coins, Mary the mother of James the Less, Salome, the bride whose wedding was saved by Jesus’ first recorded miracle, Joanna the wife of Chuza the steward of Herod, and Susanna who supported Jesus and his ministry, the women From Samaria who’s thirst was satisfied, The widow who received back her son. Jesus had healed them, comforted them, taught them, Loved them, gave them back their children, as no other rabbi had done. And as they watched him who had given them so much beaten were unable to help and give back to him. 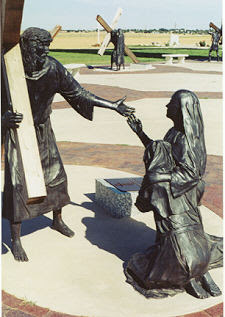 But Jesus turning to them said, “Daughters of Jerusalem, stop weeping for me, but weep for yourselves and for your children.”

Posted by Unknown at 7:13 PM No comments:

Jesus, bowed down under the weight and the length of the unwieldy Cross, which trailed after Him, slowly sets forth on His way, amid the mockeries and insults of the crowd. His agony in the Garden itself was sufficient to exhaust Him; but it was only the first of a multitude of sufferings. He sets off with His whole heart, but His limbs fail Him, and He falls. Jesus, the strong and mighty Lord, has found for the moment our sins stronger than Himself. He falls--yet He bore the load for a while; He tottered, but He bore up and walked onwards.

He made him who knew no sin to be sin on our behalf so that we might become the righteousness of God in him.
II Corinthians 5:21
Posted by Unknown at 3:13 PM 2 comments:

We adore You, O Christ, and we praise You . . . Because by Your holy Cross You have redeemed the world. Pilot hands Jesus over to be crucified. The guards take Him and lead Him away. Jesus receives the Cross without complaint or self-pity. He is like an innocent lamb being led to the slaughter. How often do we whimper, and complain, and feel sorry for ourselves when “the cross” is handed to us? Jesus by Your willingness to take up the cross, help us to understand that life is not always fair. Give us the wisdom to realize that what we are asked to do is small in contrast to what You did for us. Grace us with the fortitude to shoulder the crosses this life imposes upon us. Weakened, prodded, cursed and fallen, His whole Body bruised and swollen, Jesus tripped and lay in pain 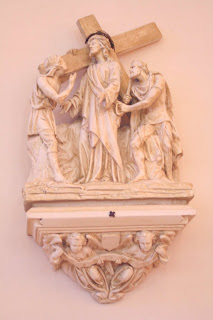 Father, the hour is come; glorify thy Son, that thy Son also may glorify thee:

Jesus is condemned to death. His death warrant is signed, and who signed it but I, when I committed my first mortal sins? My first mortal sins, when I fell away from the state of grace into which Thou didst place me by baptism; these it was that were Thy death warrant, O Lord. The innocent suffered for the guilty. Those sins of mine were the voices which cried out, "Let Him be crucified."
That willingness and delight of heart with which I committed them was the consent which Pilate gave to this clamorous multitude. And the hardness of heart which followed upon them, my disgust, my despair, my proud impatience, my obstinate resolve to sin on, the love of sin which took possession of me--what were these contrary and impetuous feelings but the blows and the blasphemies with which the fierce soldiers and the po pulace received Thee, thus carrying out the sentence which Pilate had pronounced? 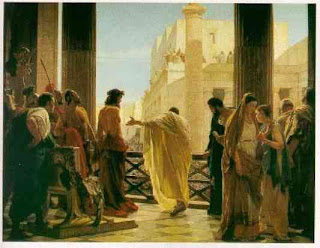 “Answering again, Pilate said to them ‘then what shall I don with him whom you call the King of the Jews?’ they shouted back, ‘crucify him!’ but Pilate said to them, ‘why what evil has he done?’ but they shouted all them more, ‘crucify him!’ wishing to satisfy the crowd, Pilate released Barabas for them and after having Jesus scourged, he handed him over to be crucified.
Mark 15:12-15
Posted by Unknown at 11:22 AM No comments:

Peter's deinighal from JC Superstar
MAID BY THE FIRE I think I've seen you somewhere. I remember. You were with that man they took away. I recognize your face.
PETER You've got the wrong man lady. I don't know him, And I wasn't where he was tonight Never near the place.
SOLDIER that's strange, for I am sure I saw you with, with him. You were right by his side, and yet you denied.
PETER I tell you I was never with him.
OLD MAN But I saw you too. He looked just like you.
PETER I don't know him! 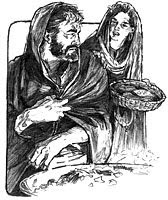 “And Peter remembered the word which Jesus had said, “before a rooster crows you will deny me three times.” And he went out and wept bitterly.”
Matt 26:75
Posted by Unknown at 11:19 AM No comments:

Shadowman from hero
It’s a shame that its world is where things aren’t always black or white. Cause it makes the motivation come around to wrong or right, but the truth is in the shadows the land of in-between it is a good thing that I have advice that’s seen the truths not what it seems
I’m the shadow man I will do this thing no one else can know I‘m the shadow man And I will go where no one else will go.
We so far from where we started all my dreams have turned to dust, it is time to salvage the self less cause and save a lot of us. It is right to sacrifice the one so we can all go free. Break the spell of his seduction and reclaim our destinySo the time as come to execute the necessary dead. doing good can be so sinister when it is what the people need. I’ll champion for the weaker ones who don’t have the guts for this. And I’ll serve out this way ward would be king and you’ll seal it with a kiss. 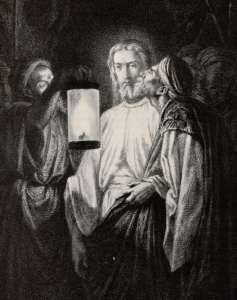 “Now he who was betraying him had given them a signal, saying “whomever I kiss, he is the one; seize him and lead him away under Guard.” After comeing Judas immediately went to him saying “rabbi!” and kissed him.
Mark 14:43-44
Posted by Unknown at 11:14 AM No comments:

Station 1 Jesus in the garden

He pulled away from them about a stone’s throw, knelt down, and prayed, “Father, remove this cup from me. But please, not what I want. What do you want?” At once an angel from heaven was at his side, strengthening him. He prayed on all the harder. Sweat, wrung from him like drops of blood, poured off his face.~Luke 22:41-44

Posted by Unknown at 6:23 PM No comments:


1. Jesus in the garden. 2. Betrayed by Judas. 3. deigned by peter. 4. condemned to die by the Sanhedrin and Pontius pilot. 5. Jesus receives his cross. 6. Jesus falls. 7. Simeon of Cyrene helps Jesus with his cross. 8. Jesus comforts the women of Jerusalem. 9. Jesus falls. 10 Jesus nailed to the cross. 11. Jesus promised heaven to the thief. 12. Jesus dies on the cross. Jesus is taken form the cross and laid on Mary’s bosom. 14. Jesus laid in the tomb.

starting on saturday I will be posting once a day which will end on good friday.
Posted by Unknown at 11:33 AM No comments:

I had never been into jars of clay till this album. this song is my favorit off this album becasue it is amazing. it is like opening up a vail and seeing all the things that are in this world because it is fallen. www.bloodwatermission.com to see what Jars of clay are doing.

Posted by Unknown at 3:52 PM No comments: