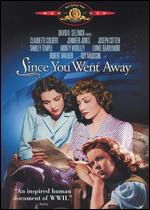 Today I must recomend this movie. it is a wonderful black and white film that is about the struggles of one family on the homefront during world war two. unlike most WWII movies this film looks at the war from the eyes of those who were left behind by Husben and father, and a boy friend.
As the movie unfoilds the charectors face the realities of the war and how it effects them. whether it is chosing to not use the black market, or entertaining the many soldures on leave to missing thier father and not knowing where he is. this movie looks into the choses that people made in this era to survive and do their part of the war.
there is no concetration camps or explosive battle senes, rather it is people dealing with the war on a level that is less glamerous but is just as much a part of the war.
Posted by Unknown at 6:21 PM

Hey Glo- my e-mail is lindykcampbell@gmail.com. I can't wait to read your story!