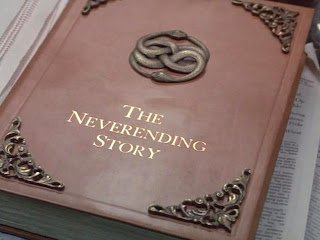 In my first post we were introduced to Bastion. In the last post bastion was introduced to the world of Fantastica. I pointed out how the Neverending story was the kind of book Bastion liked, not the stuffy school books which were always trying to convince him of something. Now in this chapter we watch as bastian begins to identify with the situation, and more importaintly with Atreyu.

there are two ways Bastian begins to identify with what is happening in the Neverending Story. First we listen to the doctors discuss the child like empresses illness. they are helpless. they can't even figure outis scene takes bastian out of the story momentarily as he is reminded of a very different scene of doctors who were helpless. the day his mother didn't make it though a surgery. we never learn what was wrong with his mom only that she died on the operating table.
It was a moment when everything changed between bastian and his father. the change is described this way-


Bastian remembered that his father had often played with him in the past. he had even told him stories. No longer. He couldn't talk to his father anymore. there was an invisible wall around his father, and no one could get through to him. He never found fault and he never praised. Even when Bastian was put back in school his father hadn't said anything. he had only looked at him in his sad, absent way, and Bastian felt that as far as his father was concerned he wasn't there at all.


Before I move on to the second point I'd like to take a moment to point out two similarities between his mother and the Childlike Empress.
1. they are both aflicted with some illness that doctros are helpless against.
2. without them the worlds they are a part of crumble.

Bastians mother was the heart of thier family without her bastian and his father might as well be strangers who live in the same house. we find out that the Childlike empress is looked upon as the ruler of Fantastic but she doesn't rule. rather she is the center of life in fantastica. "whether good or bad, beautiful or ugly, merry or solemn, foolish or wise-all owed their existence to her. without her, nothing could have lived, any more then a human body can live if it has lost its heart."

Okay now back to my second point about how Bastian begins to identify with the story comes with the introduction of a new character. Atreyu. but before we get to Atreyu we must spend some time with Cairon. Cairon is called a black centaur, his upper half is that of a black (or African- to be politically correct) man and his lower half is that of a Zebra. he enters the scene wearing Auryn, (also called the gem or the Glory) and he tells the doctors what they already know. the Childlike Empress is beyond them. therefore there is only one thing to do; find a Savior. to do that they must send out a pathfinder, or a hero to go on a great quest. The Childlike Empress has given Cairon the gem and the task to find her Chosen, Atreyu one of the green skins of the grassy Ocean. and now we go to meet Atreyu. (side note: this is  one character who was portrayed horribly in the movies, or maybe i am just getting picky. Atreyu's race is called GREEN skin. yes they are very like the Native Americans but still...) Atreyu is nothing like what Cairon expected. he is at first reluctant to give Atreyu the quest, but eventually he trusts the empress's decision. Atreyu accepts the quest without hesitation, and with it comes the gem. By taking the Gem he bares the Childlike Empress's Symbol and power.

For the rest of the Story Atreyu acts as Bastians guide to the world and his foil. and this will be one of the themes we will be looking at as the weeks progress. here though I want to point out two things these poys have in common.
1. Bastian is with out his mother, Atreyu is and orphan. but while Atreyu was then brought up by his tribe and is thus "Son of All" Bastian feels he is the 'Son of None"
2. Atreyu is all the things Bastian is not but wishes he was. in fact in a moment of wishful thinking he jumps up on the gym horse and yells "gee! Run Artax! Gee! Gee!" Artax is Atreyu's horse.

The connection between these two boys will grow through out the story but for now we will leave them here. In closing we see that the Childlike Empress has her Champion, but in answer to her hero a foe is brought forth from the darkness. Atreyu goes out on his journey with someone or something out to stop him.

till next time when we meet Morla the aged one thanks for reading and God Speed.